To See into the Life of Things: The Contemplation of Nature in Maximus the Confessor's Ambigua to John 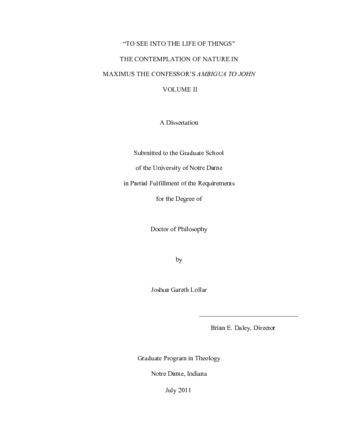 This dissertation is a study of the theme of natural contemplation in Maximus the Confessor’s Ambigua to John. The Ambigua have not received a synthetic treatment and the dissertation argues that the central concern of the text is to define the philosophical life in terms of the renewal of nature and its contemplation in Christ, the incarnate Word of God. The dissertation is divided into two parts. The first is a study of the contemplation of nature among the ancient Greek philosophers and patristic theologians before Maximus. Chapter 1 is an analysis of the place of the contemplation of nature amongst the ancient Greeks, beginning with the pre-Socratics Parmenides and Heraklitus and then proceeding to Plato, Aristotle, the Stoics, and Plotinus. Chapter 2 then considers the theme in Greek patristic sources before Maximus, where it shows how Clement and Origen of Alexandria, the Cappadocians Basil, Gregory Nazianzen, and Gregory of Nyssa, Evagrius of Pontus, and finally Dionysius the Areopagite turn the contemplation of nature to the specifically Christian concerns of creation and the incarnation of the divine Word.

In Part II the study of the contemplation of nature in the Ambigua unfolds in four chapters. Chapter 3 analyzes Maximus’ account of the basic human experience of the world in terms of the tension between time and eternity and matter and spirit. This leads to Maximus’ account of the philosophical life in Chapter 4. Here I show how Maximus accounts for the coherence of philosophy, specifically that between praxis and contemplation; I then give an analysis of his understanding of the contemplation of nature itself. Chapter 5 explores the theme of God and the world in the Ambigua and Chapter 6 demonstrates how Maximus reconciles the various aspects of philosophy he has explored throughout the text in his understanding of the renewal of nature in the economy of salvation.