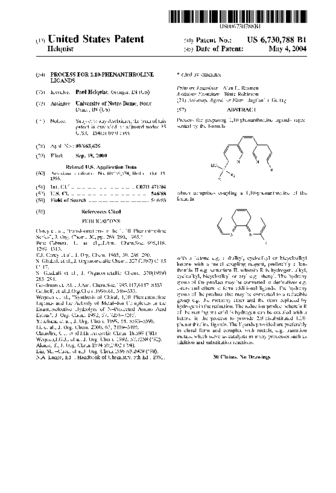 Process for preparing 1,10-phenanthroline ligands represented by the formula ##STR1## which comprises coupling a 1,10-phenanthroline of the formula ##STR2## with a ketone e.g. a dialkyl, cycloalkyl or bicycloalkyl ketone with a metal coupling reagent, preferably a lanthanide II e.g. samarium II, wherein R is hydrogen, alkyl, cycloalkyl, bicycloalkyl or aryl e.g. phenyl. The hydroxy group of the product may be converted to derivatives e.g. esters and ethers to form additional ligands. The hydroxy group of the product also may be converted to a reducible group e.g. the methoxy ether and the ether replaced by hydrogen in the reduction. The reduction product wherein R of the starting material is hydrogen can be coupled with a ketone in the process to provide 2,9-disubstituted 1,10-phenanthroline ligands. The ligands provided are preferably in chiral form and complex with metals, e.g. transition metals, which serve as catalysts in many processes such as addition and substitution reactions.