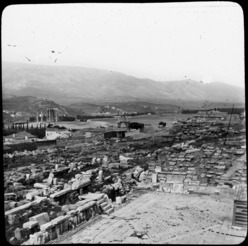 Dionysiac festivals were at first performed on a flat circular area in the Agora of Athens, but were transferred about 500 BCE to the sloping southern side of the Acropolis, where a temple to Dionysus was also built with an outside altar. It formed part of the temenos of “Dionysus Eleuthereus”. An enlarged, stone-version of the theatre, which was built c. 325 BCE, seated between 14,000 to 17,000 spectators. After this it fell into disuse and little is recorded until 61 CE where there is evidence of major renovations done by the emperor Nero. The remains of a restored and redesigned Roman version can still be seen at the site today.