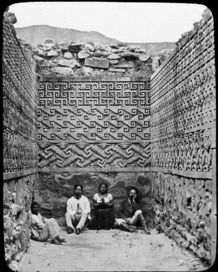 However, what makes Mitla unique among Mesoamerican sites is the elaborate and intricate mosaic fretwork and geometric designs that cover tombs, panels, friezes and even entire walls. These mosaics are made with small, finely cut and polished stone pieces which have been fitted together without the use of mortar.