Lambeth Palace: Detail view of the Tudor brick gatehouse and church to the right 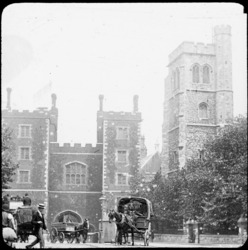 Stands at the intersection of Lambeth Road and Lambeth Palace Road, just off Lambeth Bridge.

Lambeth Palace is the official London residence of the Archbishop of Canterbury. It is located in Lambeth, on the south bank of the River Thames a short distance upstream of the Palace of Westminster on the opposite shore. It was acquired by the archbishopric around 1200. The oldest remaining part of the palace is the Early English chapel. The so-called Lollard’s Tower dates from 1440. There is a fine Tudor brick gatehouse built by Cardinal John Morton in 1495. The Great Hall was rebuilt in 1663. New construction was added to the building in 1834 by Edward Blore. The palace is now also home to Lambeth Palace Library, the official library of the Archbishop of Canterbury and principal holder of records for the history of the Church of England.