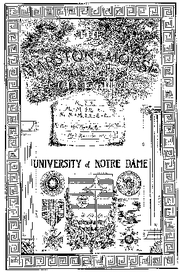 Harold Calvin Marston Morse (1892–1977) was one of the world’s leading theoretical mathematicians. He taught at Harvard, Cornell, Brown, and the Institute for Advanced Studies at Princeton, where Morse was a colleague of Einstein. He was also a “statesman of science” and represented the Vatican, along with Fr. Hesburgh, at the Atoms for Peace conference at the United Nations in 1952. He received over 20 honorary degrees from around the world.

Morse was close friends with Fr. Hesburgh, and his widow, Louise Jeffreys Morse, donated his working collection to Notre Dame in 1978. Later, she added more books to the collection. Some of the Morse collection contains notes from lectures given by famous mathematicians, and some were signed by famous authors. A bronze plaque of the bookplate commemorates his legacy.

Thomas Fern, designer of the bookplate, said “It is my view that a bookplate should reflect the donor’s interests and accomplishments as well as the symbols of the library where the collection is housed. The accomplishments and reputation of Marston Morse are so great that my first task, after studying hls life and career, was to somehow narrow my choices from dozens of significant milestones to a meaningful and manageable few.”