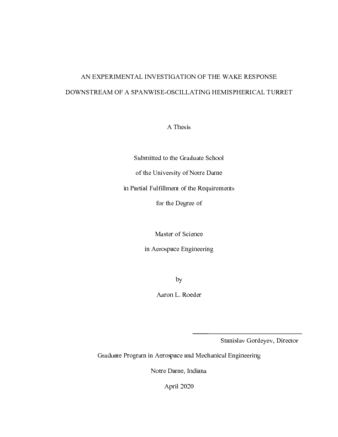 The experimental studies of the wake response downstream of an oscillating hemispherical turret at subsonic speeds are presented. The oscillating turret consisted of a turret shell, mounted on an aluminum rectangular plate. The turret assembly was designed for the turret to oscillate in the spanwise direction at a single frequency, coinciding with the main frequency of the dominant wake mode. The resonant-based aero-elastic response from the flow resulted in the turret to be forced to oscillate primarily in the spanwise direction. Multiple accelerometers mounted at different points inside of the turret assembly were used to measure local displacements. It was demonstrated that the turret oscillates at a fixed frequency over a range of subsonic freestream Mach numbers between 0.3 and 0.55, with the oscillation amplitude of approximately one millimeter.

Pressure Sensitive Paint (PSP), along with several unsteady pressure sensors, placed on the turret and tunnel wall downstream of the turret, were used to investigate the wake response to the oscillating turret. PSP was painted on the turret and wake region in order to compare the globally reconstructed pressure fields between the oscillating and stationary cases. It was found that pressure fluctuations were less energetic for the oscillating turret and the wake was more organized in the spanwise direction, compared to the stationary turret wake. The pressure field downstream of the oscillating turret was found to be asymmetrically distributed compared to the pressure field of the stationary turret configuration. POD and DMD analysis of the reconstructed pressure fields from PSP revealed the wake is characterized by global shifting and breathing motion and confirmed that the wake dynamics were suppressed when the flow forced the turret to oscillate at a predominantly single frequency. The suppressive effects of the turret oscillations on the wake dynamics were found to become more robust at higher freestream Mach numbers, and the normalized wake response frequency was found to be higher than the normalized resonant frequency of turret oscillations.