Palace of Versailles: South wing seen from the southwest, overlooking the Orangerie 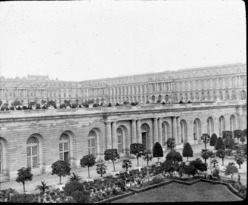 Le Vau proposed in 1668 a plan which preserved the original château at the centre, surrounding it by an ‘enveloppe’, which entirely screened it from the garden side but left it visible from the courtyard. The new building was in white ashlar. The palace interiors were fitted up in the 1670s while building works continued: the apartments of the King and Queen were decorated in marbles of various colours, and the ceiling paintings were entrusted to Charles Le Brun and his team. The enlargement of the château was a constant preoccupation of Louis XIV, and in 1678 Jules Hardouin Mansart was put in charge of extensive building works, which gave the palace of Versailles its definitive appearance. New wings, the Ailes du Nord and du Midi, were added north and south of the main block; the Galerie des Glaces replaced the first-floor terrace, with Le Vau’s projecting blocks turned into the Salon de la Guerre at one end and the Salon de la Paix at the other.