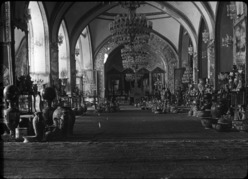 After the Takht-e-Tavoos (the so-called Jeweled Peacock Throne) was moved to the Royal jewels collection at the Central Bank, this hall was designated to hold special receptions in the presence of the king, hence the name Talar Salam. The throne is actually the Naderi Throne, built for Fat'h Ali Shah (Qajar dynasty).

Agha Muhammad (reigned 1779-1797) selected the citadel for his palace and administrative centre, and Fath ‛Ali Shah (reigned 1797-1834) completed the Gulistan (‘Rose Garden’) Palace. The only buildings that remain from this sprawling complex with luxuriant gardens set with pools and pavilions are the Takht-i Marmar, a columnar audience hall, and the ‛Imarat-i Badgir on the north and south sides. Between 1925 and 1945 a large portion of the buildings of the palace were destroyed on the orders of Reza Shah who believed that the old Qajar palace should not hinder the growth of a modern city.