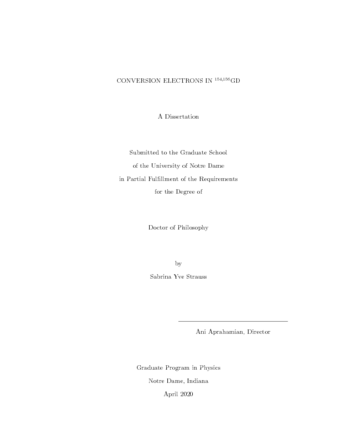 One of the open questions of nuclear structure is the nature of excited 0+ states. Probing the 0+ states in nuclei requires spectroscopy of the 0+ states with respect to other states. One such probe is conversion electrons. The transitions between two 0+ states can only be seen via E0 transitions, which are forbidden via γ-rays. Further, E0 components of Jp → Jp transitions can give similar probes of relationships between bands. Information on E0 components are challenging to measure and sparse in nuclear databases.

The rare-earth region provides a rich landscape to probe pure and mixed E0 transitions. The deformed nature of nuclei in the area leads to a large number of nuclear structure phenomena. In 154Gd, 16 0+ states have been seen in previous studies, the nature of many are unknown. The first excited 0+ state is of great interest, due to its large E0 strength to the ground state. There is a question of the nature of this state and its potential role as an example of β-vibration, or an indication of shape coexistence. 156Gd is one of the most well-studied nuclei in the rare-earth region. It has a large number of known levels, lifetimes and mixing ratios, allowing for the study of mixed E0 transitions.

This work reports on results for transitions in 154,156Gd following the 152,154Sm(α,2n) reaction using the Internal Conversion Electron Ball (ICEBall) array in coincidence with γ-rays at the University of Notre Dame Nuclear Science Laboratory (NSL).

ICEBall was re-implemented at the NSL 8 years ago and the γ-rays were detected by GEORGINA, a HPGe array at the NSL, and Clovershare, segmented HPGe detectors purchased by the Yale Nuclear Structure Laboratory that are shared by a consortium of universities and laboratories for experimental campaigns. New Jπ → Jπ transitions where measured for both 154,156Gd, allowing for the interpretation of excited band structures in the nuclei.