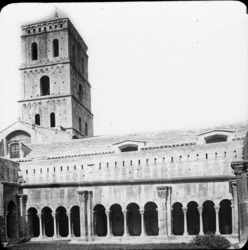 The square central bell tower dates from the 12th century.

The outer walls of the present cathedral of St Trophîme are normally assigned to the Carolingian period. The church was reconstructed with a nave and aisles in the Romanesque style during the first quarter of the 12th century, and a new Gothic choir was built in the mid-15th. The Romanesque sculpture can be divided into four distinct groups: the nave capitals, the façade and the north and east cloister galleries. The nave capitals, which derive from late antique Corinthian forms, have been dated on stylistic grounds to ca. 1120.