Málaga Cathedral: Overall distant view of side elevation, seen from a port quay 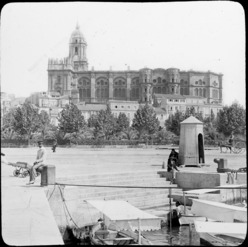 Of the post-Islamic period in Málaga, the artistic endeavour of highest consequence is the cathedral (1528-1783; one tower unfinished), built on a Gothic plan but with classical details on the site of the city’s main mosque by Diego de Siloe and Diego de Vergara (died 1582). José de Bada (1691-1756) continued work on the west nave and towers in 1722, introducing Baroque details in the looming four-storey façade, and Antonio de Ramos (died 1782) took over in 1755. Pedro de Mena (died 1688) arrived from Granada in 1658 to finish the carving of the cathedral’s choir-stalls. The cathedral houses paintings and sculptures of important Renaissance and Baroque Spanish masters, such as Alonso Cano’s masterpiece Virgin of the Rosary (1665-1666).