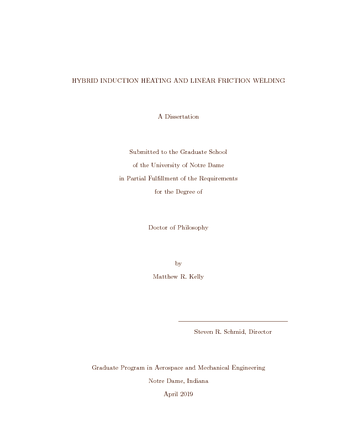 Linear Friction Welding (LFW) is a robust joining process with many potential applications, the most successful being the attachment of turbine blades to disks. Given the large scale of such operations, and the large amount of energy that must be stored, the equipment is prohibitively expensive for most industries. Heating the workpieces prior to LFW may reduce energy requirements and therefore allow for cost savings on the equipment, but the ancillary effect on weld quality is unknown. A design of experiments (DOE) approach is used to study the effect of four process parameters (average rubbing velocity, weld pressure, upset distance, and preheat temperature) on three response variables (weld strength, heat affected zone (HAZ) width/peak hardness, and energy usage) for the Induction Heating (IH) and Linear Friction Welding (LFW) of AISI 1020 steel. Numerical models for both IH and LFW were developed in DEFORM to replace the need for costly LFW experimentation with less expensive modeling. Weld strength and HAZ were insensitive to all four of the process parameters. Energy usage was most significantly affected by pressure, followed by velocity and upset. Pressure had an inverse effect on energy used, whereas velocity and upset had linear effects. Preheating the workpieces prior to LFW showed no adverse effects on weld quality, and therefore represents a viable strategy to reduce the cost of LFW equipment in the future. A novel method for approximating the IH process with an IH coil in two dimensions (2D) generated close approximations of temperature growth with time. The results from the IH numerical model were passed to the LFW numerical model, which incorporated a novel user subroutine for calculating friction factors that account for asperity flattening and real contact area growth. Contact loss issues in DEFORM while modeling the initial phase of LFW thermo-mechanically led to the conclusion that the initial phase of LFW must be modeled purely thermally, before the latter phases are modeled thermo-mechanically.