Piers Plowman and the Poetics of Enigma: Riddles, Rhetoric, and Theology 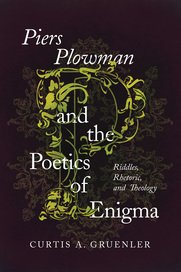 In this book, Curtis Gruenler proposes that the concept of the enigmatic, latent in a wide range of medieval thinking about literature, can help us better understand in medieval terms much of the era’s most enduring literature, from the riddles of the Anglo-Saxon bishop Aldhelm to the great vernacular works of Dante, Chaucer, Julian of Norwich, and, above all, Langland’s Piers Plowman. Riddles, rhetoric, and theology-the three fields of meaning of aenigma in medieval Latin-map a way of thinking about reading and writing obscure literature that was widely shared across the Middle Ages. The poetics of enigma links inquiry about language by theologians with theologically ambitious literature. Each sense of enigma brings out an aspect of this poetics. The playfulness of riddling, both oral and literate, was joined to a Christian vision of literature by Aldhelm and the Old English riddles of the Exeter Book. Defined in rhetoric as an obscure allegory, enigma was condemned by classical authorities but resurrected under the influence of Augustine as an aid to contemplation. Its theological significance follows from a favorite biblical verse among medieval theologians, “We see now through a mirror in an enigma, then face to face” (1 Cor. 13:12). Along with other examples of the poetics of enigma, Piers Plowman can be seen as a culmination of centuries of reflection on the importance of obscure language for knowing and participating in endless mysteries of divinity and humanity and a bridge to the importance of the enigmatic in modern literature. This book will be especially useful for scholars and undergraduate students interested in medieval European literature, literary theory, and contemplative theology.