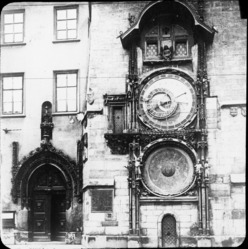 The actual calendar dial (the decoration) below the clock was added in 1870. Restored after World War II. The Late Gothic door to the left is the main entrance to the Old Town Hall.

A medieval astronomical clock mounted on the southern wall of Old Town City Hall in the Old Town Square. The Orloj is composed of three main components: the astronomical dial, representing the position of the Sun and Moon in the sky and displaying various astronomical details; “The Walk of the Apostles”, a clockwork hourly show of figures of the Apostles and other moving sculptures; and a calendar dial with medallions representing the months. The oldest part of the Orloj, the mechanical clock and astronomical dial, dates back to 1410 when it was made by clockmaker Mikuláš of Kadaň and Jan Šindel, the latter a professor of mathematics and astronomy at Charles University. Later, presumably around 1490, the calendar dial was added and clock facade decorated with gothic sculptures.