Fountain of the Rivers Ariege and Garonne: Overall raking view in its original location in Jardin des Plantes 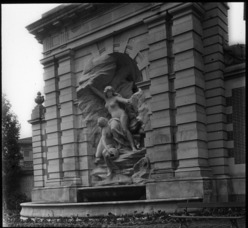 The Musée du Vieux Toulouse owns a plaster model made by Falguière. The final fountain was completed by Laporte (Falguière’s student). There are changes in the design from the model to the executed fountain, but the iconography remains the same. The personification of the Garonne River spreads its arms between the rocks of the Pyrenees where it originates. The Ariege, below, discharges its water through an urn, symbolizing the function of a tributary of the Garonne. The fountain was originally in the Jardin des Plantes; it was moved in 1982 to Place Auguste Lafourcade (outside the Palais de Justice) in Toulouse.