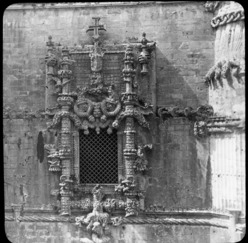 The façade is divided by two string courses of sculpted knotted ropes.

Fortified abbey ca. 45 km south-east of Leiria, Portugal. Tomar was the seat of the Portuguese branch of the Templars, which was dissolved in 1312. The Order of Christ was established in 1319 by King Diniz (reigned 1279-1325) to inherit the Templars’ property and traditions. The rotunda or Charola was begun in 1160, the typical round church of the Templars. It is a Romanesque-Gothic, centrally planned building against one of the castle walls, and also served as a defensive tower. During the administration of Prince Henry the Navigator (first half of the 15th century), a Gothic nave was added to the round church of the Convent, thus turning the round church into a church apse. The so-called Window of the Chapter House (Janela do Capítulo, 1510-1513), a huge window visible from the Saint Barbara Cloister in the Western façade of the nave, carries most of the typical Manueline motifs: the symbols of the Order of Christ and of Manuel I, and fantastic and unprecedented elaborations of ropes, corals and vegetal motifs. A human figure in the bottom of the window probably represents the designer, Diogo de Arruda.