Trafalgar Square: View of one of the bronze lions by Landseer 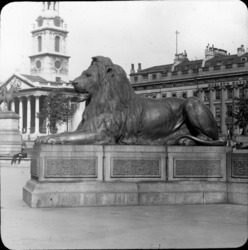 Trafalgar Square is a square in central London. In the 1820s the Prince Regent engaged the landscape architect John Nash to redevelop the area. Nash cleared the square as part of his Charing Cross Improvement Scheme. The present architecture of the square is due to Sir Charles Barry and was completed in 1845. At its centre is Nelson’s Column (1840-1843), which is guarded by four lion statues at its base. Statues and sculptures are on display in the square, including a fourth plinth now displaying changing pieces of contemporary art. The name commemorates the Battle of Trafalgar (1805), a British naval victory of the Napoleonic Wars. Fountains designed by Sir Edwin Lutyens in 1939 (replacing former fountains). The four huge bronze lions were sculpted by Sir Edwin Landseer.