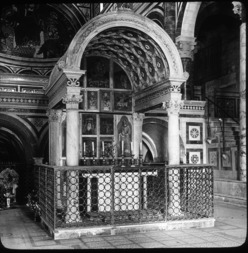 The centre of the nave is dominated by the beautiful freestanding Cappella del Crocefisso (Chapel of the Crucifix), designed by Michelozzo in 1448. It originally housed the miraculous crucifix now in Santa Trìnita and is decorated with panels long thought to be painted by Agnolo Gaddi. The terracotta decoration of the vault is by Luca della Robbia.