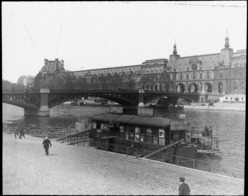 Van Gogh painted an almost identical view (‘Pont du Carrousel with Louvre’) with the small cafe barge in 1886. This bridge was destroyed in 1930.

[Begun in 1831 in the extension of the rue des Saints-Pères on the Left Bank, the original bridge was known under that name until its inauguration, in 1834, when king Louis-Philippe named it Pont du Carrousel, because it opened on the Right Bank river frontage of the Palais du Louvre near the Arc de Triomphe du Carrousel in front of the Tuileries. It was destroyed in 1930; the rebuilt bridge is concrete with three arches as well.] In 1830 and 1831 Polonceau registered two patents for building bridges in iron and cast iron, which he put into effect in a Parisian toll-bridge (1831-1834; rebuilt 1939), and the Pont du Carrousel, connecting the Quai du Louvre and the Quai Voltaire. His ‘system’ depended on the use of hollow, cast-iron, elliptical arches, thus ensuring the lightness, solidity and economy of the structure.