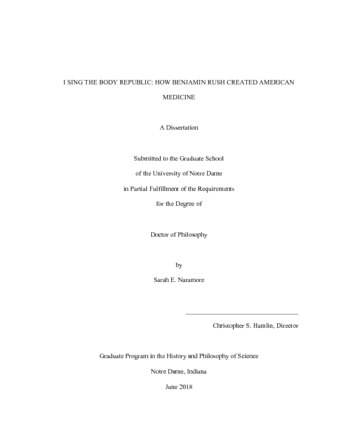 In this dissertation I argue that Philadelphia Physician Benjamin Rush (1746-1813) merged medical and political theory in an unprecedented matter to form a concept of biological citizenship for the United States in the years following independence from Great Britain. A graduate of the University of Edinburgh’s medical school, Rush began his career in 1769 as one of the few elite colonial physicians who held an MD degree. By the time he died in 1813, however, Rush publicly rejected the medicine he had learned in Scotland. He claimed to have created a new system predicated on simple physiological concepts adjusted to meet the needs of the young republic. In doing so he created an American medicine which had implications far out stripping the comparatively narrow purview of twenty-first century medical practice.


Historically Rush’s legacy has been fragmented into the histories of medicine, psychiatry, American political history, social history, and the history of reform movements. This informs the question this dissertation seeks to answer: Rush is a perennially-cited player in the history of medicine and that of the early United States, why? He was not the only Scottish-educated American physician nor the only member of a medical faculty; yet, his work stands out in a way which that of his contemporaries does not. To recover Rush’s significance and role in the development of early American medicine this project reflects the scope of his intellectual inquiry independent of modern disciplinary boundaries.

Rush’s status as the American physician between 1790 and 1813 is explained through several characteristics of his work. He achieved his status by becoming an important synthesizer of knowledge both local and foreign. Rush participated in a trans-Atlantic network of physicians, improvers, and intellectuals through personal correspondence and shared publications. In particular he leveraged the work of neo-Hippocratic colonial practitioners in the tropics to claim that the United States had a unique environment. Unlike the hot West Indies or cool Britain, the United States was unified by its variability. In order to succeed as an independent republic populated by moral and rational citizens new institutions were required to promote the country’s development and to correct mistakes manifest in immorality, filth, and disease. Rush promoted hybrid political and medical projects some, but by no means all, of which might be considered “public health.” In other instances – like public education, temperance, and personal hygiene – he used medical theory to make claims about individual choice and the reciprocal relationship between body and society.