The Idea of Anglo-Scandinavian England: "Vikings" in Medieval English Memory 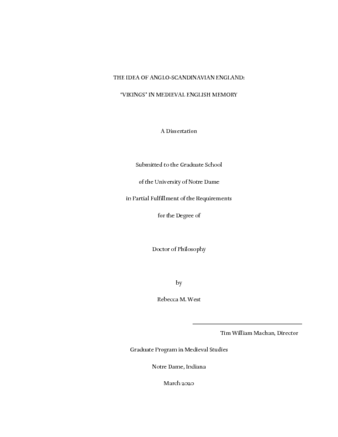 This dissertation considers the idea of medieval Anglo-Scandinavian England as explored in artistic and literary remains dating from the immediate post-Conquest period up through the fourteenth century. Social and literary histories treating this era typically focus on Anglo-Norman relations, leaving unexplored the fact that this period, following hard upon the heels as it did of centuries of Viking conquest, settlement, and rule, was still alive with the idea of Anglo-Scandinavian England. Alongside literary criticism, this study makes use of tools from music and art history and social linguistics to explore multiple possible social identities that existed in post-Conquest England. Passing from overtly Scandinavian artifacts like runes and the living use of Norse language itself, the study considers artistic representations of the Vikings in visual media that provide evidence of diachronic development in representations of the Anglo-Scandinavian other along with shifting views of the Anglo-Scandinavian past. This reuse and repurposing of Anglo-Scandinavian materials and the demonstrably-continued historical influence of these on the religion, art, and politics of the later medieval England illustrate that elements of society and life conditioned by events and habits from the Anglo-Scandinavian period continued to influence post-Conquest English society. The evidence explored in this dissertation suggests that, far from forgetting Anglo-Scandinavian England, post-Conquest authors and artists working in the twelfth and even thirteenth centuries continually reimagined this history in countless ways. Finally, I argue that despite demonstrable literary and artistic links between the Anglo-Norse period and late medieval culture and literature, no substantiatable idea of Anglo-Scandinavian social identity survived into the early modern period, despite later modern claims of nationalistic Norse-English racial identity.