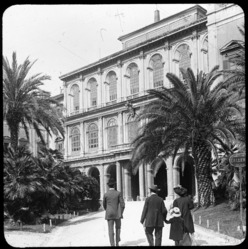 The Palazzo Barberini, begun in December 1628, was the last and most complex of Maderno’s palace designs, although it was largely executed by others. The basic idea for this palace, with two separate wings in an H-plan, was conceived by its owner, Taddeo Barberini, nephew of Pope Urban VIII. Although many others contributed to the design, Maderno was in charge of design development. Here again can be seen his characteristic planning of eminently functional suites, closed axes (most notably in the deep, apsed entrance portico, the passage through which was cut only in the 1670s), the complex, three-dimensional arrangement of rooms on the several levels of the palace and the linking stairs. The great three-storey, seven-bay loggia of the west façade is surprising in the context of Maderno’s oeuvre (or that of any other Roman architect in the 1620s), but the whole exterior is rendered in his distinctive style with such details as columns set within channels in the walls, splayed jambs (resembling those at the stair entrance in the Palazzo Mattei) in the third storey of the loggia, and the superimposed frames of the north portal.