Mitla: Grand Hall of Columns, with monoliths which would have supported a flat roof 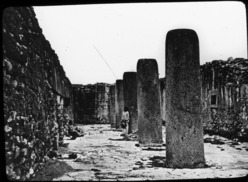 The Columns Group, Grand Hall of Columns. It measures 120 by 21 feet (37 by 6.4 m) and has six columns of volcanic stone that once supported the roof.