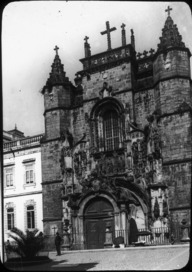 Because the first two kings of Portugal are buried in the church it was granted the status of National Pantheon. Founded in 1131 outside the protecting walls of Coimbra, the Santa Cruz Monastery was the most important monastic house during the early days of the Portuguese monarchy. A Romanesque structure, it subsequently underwent considerable change: after a series of alterations in the 15th and 16th centuries and particularly following work carried out in the early 16th century by Diogo de Castilho with the assistance of, among others, Nicolau Chanterene, it came to exemplify the flowering of the Gothic style in Coimbra and the exuberance of the Manueline style.