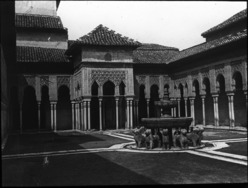 Muhammad V built the Riyaḍ Palace (known since the Reconquest as the Palacio de los Leones) which contains the cruciform Patio de los Leones at the heart of the palace, which has a central fountain with twelve stylized standing lions, carved in white marble to fit exactly the proportions of the patio; the lions support a polygonal basin inscribed with a poem by Ibn Zamrak, a pupil of Ibn al-Khaṭib.