Exploration of Radiation Effects on Boehmite and Gibbsite 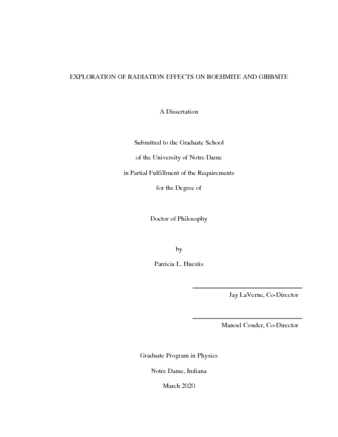 The effects of ionizing radiation on boehmite (γ-AlOOH) and gibbsite (γ-Al(OH)3) was explored as it pertains to the Hanford waste cleanup challenges. Initial studies of the radiolytic stability of boehmite and gibbsite with gamma rays and alpha particles revealed that the bulk structure of both boehmite and gibbsite are remarkably stable to high doses as probed by both Raman spectroscopy and powder x-ray diffraction. X-ray photoelectron spectroscopy revealed that the surface of both materials was greatly reduced following high doses, and charge corrections for x-ray absorption spectroscopy indicated a change in charging behavior following irradiation. The changes in charging behavior were followed up with aggregation studies that revealed that irradiated boehmite aggregates differently than pristine boehmite, and those differences remain even with the addition of large amounts of salt. Surface sensitive measurements made with the radiation atomic force microscope revealed that radiation could enhance dissolution rates of gibbsite at a high pH. Finally, the radiolytic activity of thermal transition phases in boehmite was explored. It was revealed that the different transition phases had radically different radiolytic activities even when the structural characterization gave similar results. Analysis of the trapped hydrogen atom seen in room temperature electron paramagnetic resonance along with the hydrogen gas production revealed that the most likely primary production mechanism for readily detected hydrogen gas in the radiolysis of boehmite is the formation of an interlayer hydrogen atom that then travels to the surface and undergoes an abstraction reaction with adsorbed water. The hydrogen atom trap itself is likely a defect in the material which is why the measured lifetime of the hydrogen atom at room temperature is orders of magnitude larger than predicted with density functional theory calculations.