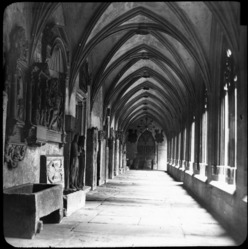 The funerary monuments of the archbishops of Mainz, most of which stand upright against the nave piers, form an almost uninterrupted series from the 13th century to the 19th. The earliest are sarcophagus lids.

The cathedral of the archbishops of Mainz, who were high chancellors and electors of the Holy Roman Empire, is dedicated to SS Martin and Stephan and is one of the three “imperial cathedrals” on the Rhine, the other two being Speyer and Worms. After Speyer, it is the earliest of the great German vaulted cathedrals, and it is an important example of Middle Rhenish Romanesque architecture. The interior of the cathedral houses tombs and funerary monuments of former powerful Electoral-prince-archbishops, or Kurfürst-Erzbischöfe. This is the third building on the site, the first was begun ca. 975, destroyed 1009; the second was burnt in 1081.