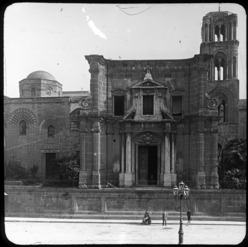 Byzantine dome to the left and Romanesque campanile to the right. The main entry to the church is still through the attached campanile, not through this portico.

In a Greek–Arab document of 1143, preserved in the archives of the Cappella Palatina, Admiral George of Antioch (a Greek and a principle minister of the Norman King Roger II of Sicily) declares that he has erected the church of S Maria and spared no effort or expense in its decoration. In 1139 a convent of Benedictine nuns was founded in the nearby houses of the Martorana, where a small monastic centre may already have existed. In 1434 the church of S Maria was donated to the convent, which afterwards assumed its name. The original plan of the Martorana convent has been greatly altered; it now houses the faculty of architecture of Palermo University. By 1451 the church was in such a bad condition that the university requested the intervention of Alfonso I (reigned 1416-1458). From then until the 18th century it was subjected to numerous restorations. It has Norman, Romanesque and Byzantine elements and a Baroque portico (facade).