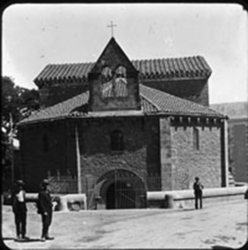 Baptistere Saint-Jean is the oldest Catholic church in France, dating from the 4th century. The central part of the building was constructed around 360. From the twelfth to fourteenth century, the church was embellished by frescoes which are still visible today. The building was abandoned in 1791 during the revolution, confiscated from the church and sold to a private citizen. It was repurchased in 1834 and underwent restoration in the middle of the 20th century.