Cathedral of Saint Vitus: Interior detail of nave, royal mausoleum, seen from a side aisle near the high altar 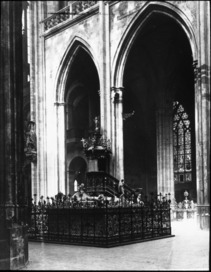 View is from the side of the high altar, looking back towards the nave. Of marble, the royal mausoleum (1589) consists of the tombstones of Ferdinand I of Austria, his wife Anna of Bohemia and Hungary and the Holy Roman Emperor Maximilian II.

Located within Prague Castle and built incorporating parts of older buildings on site dating as early as 929. Mathias of Arras, who had been summoned from Avignon by the future Emperor Charles IV, started at the east end of the building ca. 1342 , siting the choir outside the existing basilica and cloister. The Gothic choir has a chevet with an ambulatory and five polygonal radiating chapels. In 1356 Charles IV summoned Peter Parler to finish the cathedral. Parler remained in charge of the cathedral works for more than 40 years. Building continued into the 20th century; the north tower spire dates from 1561.