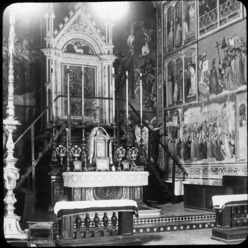 It was built between 1350 and 1356 to house the stained corporal (chalice cloth) of the Miracle of Bolsena (1263). It is from this chapel that the reliquary with the corporal is transported for religious processions through the town on feast days. Painted 1357-1363, the frescoes are primarily the works of three Orvietan artists: Ugolini di Prete Ilario, Domenico di Meo, and Giovanni di Buccio Leonardelli. The 1358 aedicula-shaped tabernacle was designed by Nicola da Siena but finished by the Duomo’s then-capomaestro, Andrea Orcagna.