Rouen Cathedral: Detail, north tympanum, Scenes from the Life of St John the Baptist, a patron of Rouen 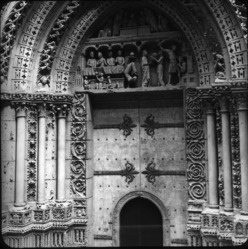 The left portal (Porte St-Jean) is an important survivor of the 12th-century Early Gothic period. The tympanum depicts the martyrdom of St. John the Baptist. In the lower register, Salome performs a balancing act (like a medieval jongleur) before King Herod, John is executed, and his head is presented on a platter. The upper register illustrates the legend that John was taken into heaven in ecstasy just before his death.