Teotihuacán: Architectural sculpture in the shape of an abstracted form of the feathered serpent 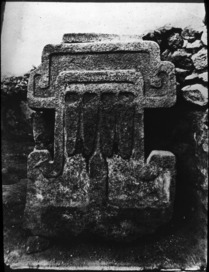 Pre-Columbian site in the Mexican Central Highlands. It was the region’s pre-eminent city during the Late Pre-Classic and Classic periods (c. 250 BC-c. AD 900). Little is known about their ethnic origins, but, with a population estimated at up to 200,000, in the 6th century AD Teotihuacán was the largest and most populous city in the Pre-Columbian Americas and sixth most populous in the world. The religion of Teotihuacan was similar to those of other Mesoamerican cultures. Many of the same gods were worshiped, including the Feathered Serpent (the Aztecs’ Quetzalcoatl) and Rain God (the Aztecs’ Tlaloc.). The dominant civic architecture is the pyramid. The fall of Teotihuacán occurred in the 8th century, when the centre of the city was extensively destroyed and, according to ethnohistorical sources, its population dispersed. Some seven centuries later the site was known to the Aztecs only as a place of religious pilgrimage and myth.