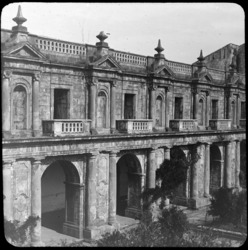 The development of the town’s school into the first Portuguese university in 1308 was an important factor in the development of Coimbra, especially after the University’s final establishment there (having been relocated meanwhile in Lisbon) in 1537. In 1537, during the reign of João III, the university moved definitively to Coimbra, where it was installed in the Alcaçova Palace. The building of colleges, churches and convents and the increase in the university population made Coimbra, effectively the humanistic capital of the country, one of the principal cities of the kingdom. In 1772, in the course of reforms encouraged by the Marquês de Pombal and intended to bring Portuguese culture in line with European Enlightenment, Neo-classical architecture was introduced in a huge building programme directed by the Englishman William Elsden; more negatively, in the 1940s an extension of university buildings resulted in the destruction of much of the ‘Alta’ district of Coimbra.