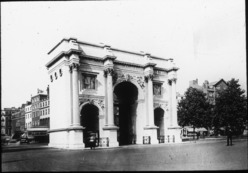 Stands near Speakers’ Corner in Hyde Park, at the western end of Oxford Street.

In 1828, John Nash designed the arch based on the triumphal arch of Constantine in Rome. It was originally erected on The Mall as a gateway to the new Buckingham Palace, which was rebuilt by Nash from the former Buckingham House, which at that time had an open courtyard with projecting wings. In 1851, the arch was moved to its present location during the building of the east front of the palace, which enclosed the courtyard. Due to Nash’s financial problems, some sculptures intended for the arch ended up on the façade of the National Gallery.