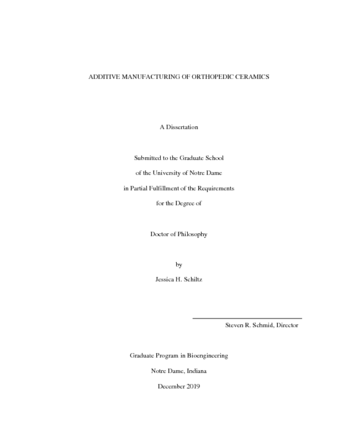 Annually, hundreds of thousands elect for a total hip replacement (THR), a surgical operation meant to address the complications associated with severe osteoarthrosis. The forecasted rise in THR utilization has heightened the demand for implant materials optimized for survivorship. Consequently, a critical factor in THR longevity is wear resistance. Oxide ceramics like zirconia (ZrO2), have consistently surpassed metal and polymer variants and been long accepted constituents in hip implants. However, ceramics are damage intolerant, requiring costly processing steps to mitigate microstructural defects that could initiate catastrophic failure in vivo. As a result, premium pricing of ceramic-on-ceramic THR has limited their widespread use, a problem further compounded by clinician concern over brittle fracture despite generational improvements in manufacturing.

As such, additive manufacturing (AM) has emerged as a platform positioned to revitalize the ceramic market. AM presents a cost-reduction opportunity for orthopedics because upfront tooling is eliminated, and the process remains competitive for moderate production runs. Though the AM market has observed significant growth, developments around dense structural ceramics have lagged behind metals and polymers. Consequently, factors that produce AM ceramics that favorably compete with traditional bulk-forming methods are largely unknown. Layered manufacturing strategies could potentially accelerate the next generation of ceramics with improved THR utilization.

The primary objective of this work was to advance material processing of AM orthopedic ceramics through tribological and mechanical evaluation. Zirconia specimens produced with photo-polymerization and material-jetting AM, tested in pin-on-disk configurations, were found to have wear coefficients equivalent to reported literature and experimental controls. Investigations into the effect of build direction for stereolithography (SLA) ZrO2 coupons were performed with respect to thermal aging and accelerated wear outcomes. Results from a modest data set revealed that wear behavior of self-mated SLA ZrO­­2 was isotropic when build direction was varied. In addition to wear-resistance, mechanical competence is a crucial metric for orthopedic bearing applications. Certain AM technologies demonstrated that bend strengths of photopolymerized ZrO2 can meet the minimum standard. Subsequent fractography showcased defect populations introduced by layered manufacturing, including air bubbles and incomplete laminar consolidation. Preliminary experiments then established a size-strength dependency for SLA ZrO2 which supports that predictive strategies employed for brittle materials can be extended to the development and advancement of AM ceramics.