Rethinking Happiness: The Role of Hope in Virtue Ethics 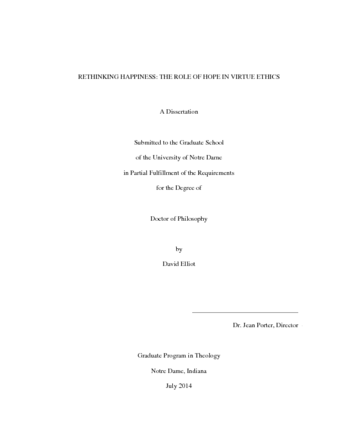 The rise of virtue ethics has led to many treatments of the cardinal and theological virtues. But often due to fears that it is too “otherworldly,” the theological virtue of hope has languished in obscurity. Drawing upon St. Thomas Aquinas, I correct this oversight, arguing that hope makes a key contribution to happiness in the next life — and in this one. In common with many virtue ethics and eudaimonist thinkers, I propose that the happy life is the characteristically enjoyable virtuous life. Yet as Aristotle and contemporary virtue ethics suggest, happiness is vulnerable to suffering, sickness, injustice, decline, and death. Limiting the extent to which even the virtuous may be happy, such ills constitute a somewhat depressing “eudaimonia gap.” Since the virtue of hope encourages the agent with the prospect of perfect and lasting beatitude, I argue that the gap leaves room for the virtue of hope to be recognized as “good news” rather than just “curious news” within virtue ethics and in human life generally.

Hope sustains us from the sloth, cynicism, and despair that threaten amid life’s trials, it provides an ultimate meaning and transcendent purpose to our lives, and it assures us that the desire for permanent and complete happiness can be fulfilled. Encouraged by the anticipation of perfect beatitude whose first fruits begin in this life, the Christian should therefore “rejoice in hope.” Yet many critics regard hope’s joyfulness as narcissistic and view hope as a “selfish” virtue which cares only about heaven and lets the world fester. In contrast, I argue that Thomistic hope partners with charity and is applied to justice, seeking virtue and happiness not just for the self but for the earthly city of which the hopeful remain committed members. Indeed, the vice of presumption opposed to hope consists precisely in the refusal to perform virtuous works of social justice and mercy in the “presumption” that promoting the common good is optional to those seeking eternal life.

To give specific form to my claims, I turn to the beatitudes in the Sermon on the Mount and argue that they represent the paradigmatic form of the happy life shaped by the virtue of hope. As a practical application of hope, I develop the ars moriendi or “art of dying” as a resource for end-of-life care in an aging society where death is often seen as unintelligible and approached with despair.