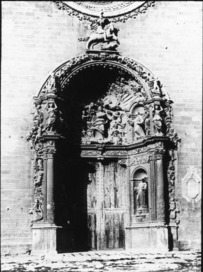 San Francisco, begun in 1314, initially had a wooden roof, but in the third quarter of the 14th century this was replaced by a stone vault; the church also has a fine, two-storey cloister. The Baroque façade (which is austere except for the rose window by Pere Comas and elaborate sculpted portal) was rebuilt by Francisco de Herrera in the seventeenth century.