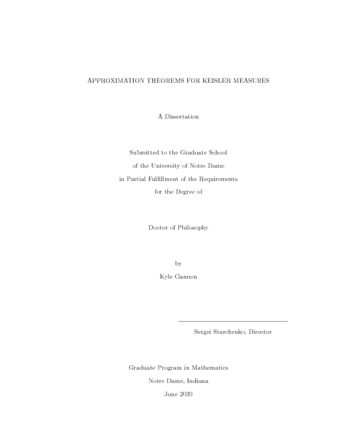 This dissertation is concerned with Keisler measures and their approximations. We investigate tame families of Keisler measures in varying contexts. We first restrict ourselves to the local NIP setting. There, we partially generalize a theorem of Hrushvoski, Pillay, and Simon and show that in this context, a measure is definable and finitely satisfiable (dfs) if and only if it is finitely approximated. We then consider generically stable measures outside of the NIP setting. We show that generically stable types correspond to {0,1}-valued frequency interpretation measures, and we give examples of finitely approximated measures which are not frequency interpretation measures and local dfs measures which are not locally finitely approximated (joint with Gabriel Conant). We then introduce and describe “sequential approximations”. We show that measures which are finitely satisifable in a countable model of an NIP theory admit this kind of approximation. We also prove that generically stable types admit a similar (and stronger) approximation. In the final chapter, we restrict ourselves to the group setting and introduce a convolution operation on Keisler measures. We classify all idempotent measures over stable groups and also show that a particular convolution algebra over an NIP group is isomorphic to a natural Ellis semigroup (joint with Artem Chernikov).