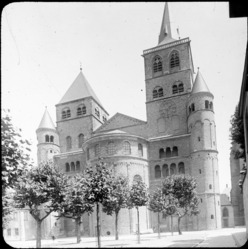 The West end choir, with its apsidal semi-cylinder expressed on the exterior façade, was completed in 1196.

The cathedral founded in the early 4th century was a double cathedral, consisting of adjacent basilicas that underlie the present cathedral (north) and the 13th-century Liebfrauenkirche (south). In its present form the cathedral of St. Peter started to take shape from 1037 and continued through the 13th century. Work began on a Baroque renovation of the cathedral interior; in 1702 a shrine chapel for the Holy Robe was built on to the east choir. A church dedicated to the Virgin that carried out the parochial functions of the cathedral was started ca. 1235 over the eastern part of the former south basilica; it was completed ca. 1260.