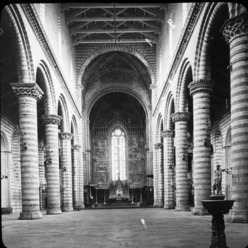 The interior, like the exterior, is decorated with alternative rows of travertine and basalt but only to a height of about 1.5 m. The holy water stoup by Federighi is visible on the right.