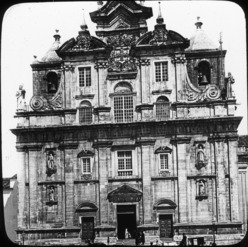 In 1598 the architect Baltazar Alvares began to build a church for the Jesuits (named Onze Mil Virgens Church), now the Sé Nova (New Cathedral), one of the best examples of the new Jesuit buildings and a synthesis of traditional Portuguese architecture and the innovations of Il Gesú in Rome. In 1759, the Jesuit Order was banned from Portugal by the Marquis of Pombal, Prime-Minister of King José I. In 1772, the bishopric seat was transferred from the old Romanesque Cathedral of the city (now called the Old Cathedral of Coimbra) to the vacant, spacious and more modern Jesuit church.