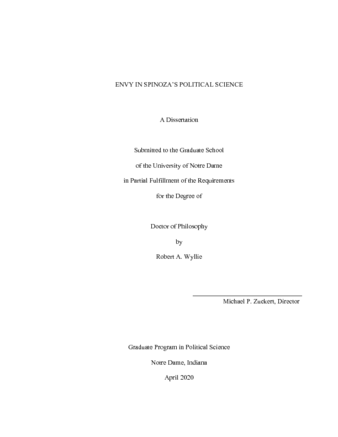 Spinoza is the first to argue that increased commercial and political opportunities in more market-oriented and more democratic societies will bypass situations that, absent these opportunities, would generate socially destabilizing envy. In Spinoza’s unfinished Political Treatise (1677), the stability of every classical regime type—monarchy, aristocracy, or democracy—depends upon greater commercialization and greater democratization in order to thwart the underlying threat of envy. Spinoza criticizes regimes where wealth and power are monopolized by very few, and proposes property laws and political structures that more widely distribute these scarce and rival goods. Spinoza’s proposals are unrecognized prototypes of contemporary political philosophers’ arguments that liberal-democratic institutions buttress some modern societies against the ancient political problem of envy.

These breakthrough modern solutions in the Political Treatise are meant to address the problems that emerge in the psychology of Spinoza’s Ethics, where he presents envy as the first cause of hatred. While envy is a political problem attested by the most ancient writers, Spinoza arrives at the problem of envy in his attempt to reduce political behavior to a simpler level of psycho-physiological causes. This commitment to naturalism leads Spinoza, furthermore, to reject the account of the cause of war given by Thomas Hobbes, with whom Spinoza is often compared. Identifying envy as the fundamental problem of Spinoza’s political science gives us an appreciation of the originality and power of his political theory, and also of his pivotal importance in the history of political thought.

Spinoza proposes a political science that completely accounts for the origins of all hatred, religious violence, and civil war—in envy. He also proposes a way to bypass this problem at the level of constitutional design: creating opportunity, not relying upon moral authority. Spinoza’s account has none of the attractive modesty that characterizes contemporary political philosophy in the same vein. However, reconstructing his political science in its completeness allows us to better understand the presuppositions, benefits, and unintended consequences of modern solutions to this most ancient political problem.