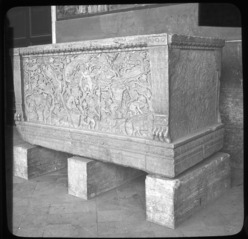 Just inside the entrance is the tomb of Guglielmo Cardinal Fieschi, died 1256, but entombed in an ancient sarcophagus, incidentally decorated with a relief depicting a pagan marriage feast.

The basilica of San Lorenzo fuori le Mura is one of the most important basilica churches and one of the Seven Pilgrim Churches of Rome. The basilica is the shrine tomb of the church’s namesake, Saint Lawrence, one of the first seven deacons of Rome martyred in 258. Pope Pius IX, awaiting canonization into sainthood, is also buried at the basilica. Before the present-day basilica was constructed, the estate upon which it sits was once home to a small oratory built by Emperor Constantine I. The emperor built it over the site on which it was believed that Saint Lawrence was executed. In the 580s, Pope Pelagius II commissioned the construction of a church over the site, in honor of the martyr. In the 13th century, Pope Honorius III commissioned the construction of another church in front of the older structure. The two structures were united as part of a program of urban renewal. Excavations have revealed several other crypts of various people, buried below street level. Saint Hilarius is buried here. The portico, ca. 1220, has Cosmatesque decoration by the Vassaletti family of craftsmen. In Rome, it seems, galleries were added to basilicas to provide space for the crowds of pilgrims seeking access to the graves of Roman martyrs, or as a separate upper gallery for women (matronaeum).