Zisa: Exterior view of side staircase and facade 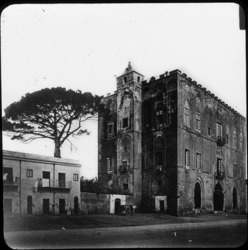 The stair is a 17th century addition when the Zisa, reduced to very poor conditions, was purchased by Giovanni di Sandoval. The latter’s marble emblem with two lions can be seen over the entrance. The external windows were also modified.

The Zisa is a castle in the western part of Palermo, Sicily. The construction was begun in the 12th century by Arab craftsmen for king William I of Sicily, and completed by his son William II. The edifice had been conceived as summer residence for the Norman kings, as a part of the large hunting resort known as Genoard (“Paradise on Earth”) that included also the Cuba Sottana, the Cuba Soprana and the Uscibene palace. The Zisa is clearly inspired by Moorish architecture. The name Zisa itself derives from the Arab term al-Azîz, meaning “noble”, “glorious”, “magnificent”. The same word, in Naskh script, is impressed in the entrance, according to the usual habit for the main Islamic edifices of the time. The central hall features what looks like a qibla niche with muqarnas and mosaic decoration which originally held a fountain.