Cremona Cathedral: Distant view showing cathedral and the Torrazzo to the left 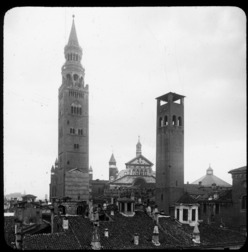 The Torrazzo of Cremona is the bell tower of the Cathedral of Cremona. At 112.7 metres (343 ft 6 in), it is the third tallest brickwork bell tower in the world, completed in 1309. It has an astronomical clock.

Dedicated to Santa Maria Assunta (Our Lady of the Assumption). The cathedral was begun in 1107 with a plan typical of the Romanesque architecture of the Po valley and consecrated in 1190. It was radically altered in the later 12th century and the 14th to the Lombard Gothic style, with rectangular nave bays and deep transepts. The façade was rebuilt several times between the 12th and 16th centuries: in 1274 the rose window by Giacomo Porrata was added, in 1491 Alberto Maffiolo da Carrara (fl 1486-1499) replaced the classical pediment with an attic storey with four niches, and in 1585 further alterations were made by Sebastiano Nani. The cathedral workshop was also a sculpture studio, and the Four Prophets carved by Wiligelmo before 1117, which flank the main door, are outstanding for their complexity. Its bell tower is the famous Torrazzo, symbol of the city and tallest pre-modern tower in Italy. Also annexed is the Baptistery, another important medieval monument.