Church of Our Lady before Týn: Context view of West facade, seen from the square 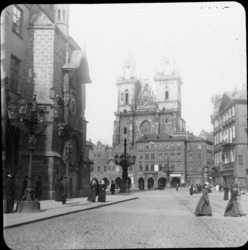 On the east side of the Old Town square the Týn (‘enclosed area’) developed (11th century), with a hostel and warehouse for foreign merchants that later became a customshouse, and with the church of St Mary (1256), fronted by the parish school. St Mary of Týn was rebuilt from 1339 to ca. 1410. Under the Hussite king George of Poděbrady, St Mary of Týn became the symbol of the Utraquists (who demanded communion in both kinds), and he began the twin western towers (completed under Vladislav II Jagiellon). The southern tower was not completed until 1511, under Matěj Rejsek. The great Danish astronomer Tycho Brahe was buried in the church in 1601.