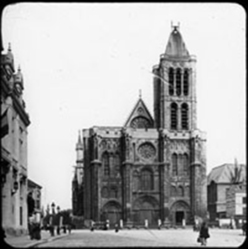 A large medieval abbey church in the city Saint-Denis, now a northern suburb of Paris. Its choir, completed in 1144, shows the first use of all of the elements of Gothic architecture. Both stylistically and structurally, the Basilica heralded the change from Romanesque architecture to Gothic architecture. The basilica became a place of pilgrimage and the burial place of the French Kings with nearly every king from the 10th to the 18th centuries being buried there, as well as many from previous centuries. The abbey church became a cathedral in 1966. Although it is known as the “Basilica of St Denis”, the cathedral has not been granted the title of Minor Basilica by the Vatican. As it now stands, the church is a large cruciform building of “basilica” form; that is, it has a central nave with lower aisles and clerestory windows.