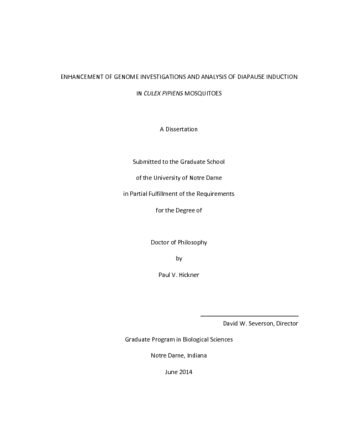 Mosquitoes in the Culex pipiens complex are major vectors for a number of important human pathogens. Due to the paucity of vaccines against many mosquito-borne diseases, control of vector populations remains an important means for disease prevention. Members of this species complex are among the most geographically widespread mosquitoes, worldwide. There are two major species in the Cx. pipiens complex: Cx. quinquefasciatus (Say), the southern house mosquito, which occupies tropical to warm temperate regions; and Cx. pipiens (L), the northern house mosquito, which occupies temperate regions. Cx. pipiens females, in response to environmental cues, enter diapause to endure the adverse conditions associated with winter in temperate regions. The rationale for this research is the elucidation of the genetic mechanisms driving diapause induction could provide novel targets for genetic control measures as well as provide additional insights into the forces influencing their geographic distribution.

My first aim was to develop tools to enhance genomic studies in Cx. pipiens complex mosquitoes. We used data generated by the Cx. quinquefasciatus (Say) genome project for in silico development of over 75 microsatellite markers. Cross-species utility of these markers was tested in populations from Trinidad and the USA. In addition, we used 6 F1 intercross mapping populations to map the location of these microsatellites, which subsequently allowed us to assign 10.4% of the genome assembly and 13.5% of the protein coding genes to chromosome position. We constructed a BAC library (NDJ) with approximately 10.1 fold coverage of the Cx. quinquefasciatus genome. We used 29 microsatellites and five gene markers to help estimate genome coverage.